The Glow's best Japanese releases of 2022 so far

The Glow's best Japanese releases of 2022 so far

Featuring stratospheric pop, riotous rock, mind-broadening experimental music and much more, these are The Glow’s best Japanese projects from the first six months of 2022.

From hotly-anticipated big-name returns (including Kaho Nakamura, Hikaru Utada and Sakanaction, to name a few) to the countless buzzy emergent artists blazing onto scenes across Japan, 2022 has seen a huge range of highlights from across plenty of different styles and genres. It’s already been a fascinating year for new Japanese music and there’s plenty to recommend – below are ten of our favourite projects from 2022 so far, listed in alphabetical order. If the star-speckled 2 Tone (2017) was listeners’ introduction to the many avenues of sound open to Shuta Hasunuma and U-zhaan, Good News offers focus, a much more level and immersive release. Hasunuma’s enigmatic compositions veer between fidgety electronics and luscious ambience, though, whether isolated in space or tumbled along by a beat, are always gorgeous and engulfing. U-zhaan’s tabla, meanwhile, is rapid and unbound, serving as the record’s most obvious source of technical astonishment and yet also the root of its groove and levity. Together the two have never been so cohesive and intoxicating. In many ways, luscious psych rockers Kikagaku Moyo’s latest (and supposedly final) record Kumayo Island simply continues doing exactly what the band have excelled so thoroughly at previously. Loops of guitar gallop over deft, pattering percussion and soft, textural vocals –but within such trances and gentleness is a remarkable amount of both instrumental and stylistic depth. Plodding funk, rapturous folk and meditative ambience are fashioned out of horns, woodwind, sitar, airy field samples and vast expanses of space, all of which combine to conjure up an actual island in audio form. It’s all executed with the kind of shimmering, strutting confidence you’d expect of a band ending on a high. When pop goes complicated, all too often the product is convoluted and dense; there’s a tendency to forget the hooks and melodies – to forget what is, after all, the very essence of pop. But not Kaho Nakamura. Out of dense, tricky compositions, Nakamura fashions sumptuous, cerebral, addictive pop. NIA, her most recent full length, is just as glorious as 2018’s celebrated AINOU, a playful work that, despite its technicality, never feels remotely overwhelming or burdensome. Haru Nemuri returns with an intense blend of exasperation and optimism on Shunka Ryougen [loosely Setting a Field Ablaze in Spring]. If Haru to Shura [Spring and Fall] was a fully formed noise rock, experimental hip-hop beast, tight and polished, Ryougen decides that the way forward is to strip back and deconstruct Nemuri’s sound. Her compositions shine as she matches her vocal deliveries to a plethora of different musical genres and ideas. Many tracks deal heavily with ideas of self-destruction, focusing on despair and frustration, while others concern love and acceptance of the struggles of modern life. Grandiose, raw and beautifully unhinged, Nemuri’s second full-length is a testament to her reputation as an innovator and risk-taker. Much more ponderous, patient and far-reaching than its brash, slightly cheesy title suggests, Hyper Nu Age Tekno is a record of disparate styles and complex aesthetics. Not just veering between poles of brutal, machinal rattles and plush, pillowing ambience, Taro Nohara’s work bridges pasts and futures, combining a progressive impulse with retro-futurist sounds and instruments. Featuring elements of IDM, ambient music, plunderphonics and, indeed, techno, it’s a confounding but gripping listen – if this really is techno’s new age, count us in. Co-starring a global range of talents (from cloud rap titan Bladee to other on-trend stars yeule, Mechatok and Palmistry), Tohji’s t-mix mixtape builds upon both the punchy trap bangers of his debut Angel and sweeping atmospheres of last year’s KUUGA. Between the expected cloud rap and auto-tuned R&B are bits of bubblegum bass, trance, glitch and ambient music; all splendidly aloft and addictive, extraordinarily ungraspable in its textures and unnervingly, ridiculously pretty. Uami’s willingness to properly dwell upon a moment or passage of beauty – to revel in it, lay it bare, and thereby make it even more immaculate – is utterly invaluable. All three of her EPs released in 2022 teem with a very obvious, poignant prettiness matched by few others. And following last year’s full-length Hiru ni nemuru hito [People Who Sleep in the Daytime], uami seems to be venturing out towards even more disparate styles (funk, soul, trap, post-industrial and electropop, to name a few), using the shorter format to experiment in subsuming new elements to her distinctly spectral, textured sound. helpsavealife, imyourunbeliever and emprqqm are all worth your ears: masterful works by a spellbinding songcrafter. 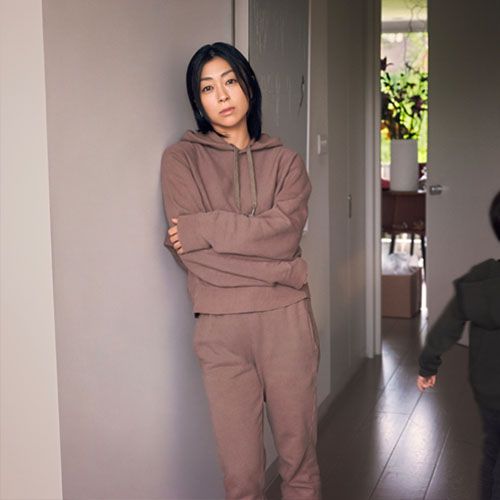 Two-and-a-bit decades in, Hikaru Utada’s opulent R&B has lost none of its appeal. The past four years have seen Utada plunder their experiences further and unearth some of their freshest, most profound lyrics yet. Bad Mode is pop that navigates varied and stylish sounds, helped by wizardry from some of contemporary electronica’s most exciting names. Technical maestro Floating Points (Sam Shepherd) pops up on some of the record’s richest, most strung-out tunes, hyperpop pioneer A.G. Cook adds punch to a select few singles, while longer-term collaborator Nariaki Obukuro reliably polishes up much of the rest. Excellent on several fronts, Bad Mode is a phenomenal pop record. As her lyrics get weirder and the beats get faster, Zombie-Chang improves upon her techno-pop sound with Stress de Stress. Pre-release singles “PaRappa the Gabber” and “Stress” perfectly embody Stress’ new intensity and are great tasters of the rest of the work. The acid techno and EDM of Take Me Away From Tokyo are joined by their eccentric cousins hardstyle and gabber, while the lyrics will have you seriously questioning your sanity. A fantastic addition to Zombie-Chang’s playfully absurd, blaringly unconventional and frankly bonkers discography.