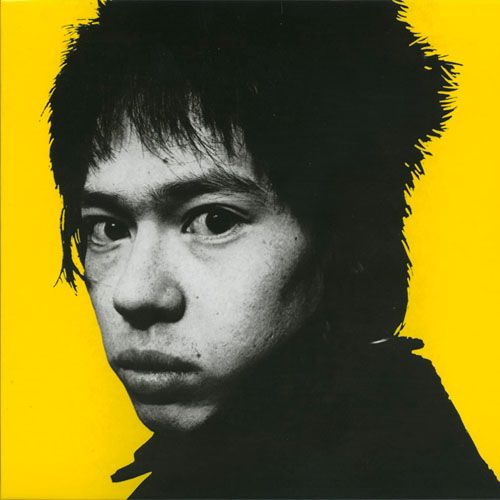 Made up of the likes of SS, Ultra Bidé, Aunt Sally (led by contemporary experimentalist Phew) and INU, they were among the first bands to play punk, hardcore, noise and avant-garde music in Japan.

Kō Machida, INU’s singer, was in high school when he founded his first rock band. Listening to British, European and American artists like Public Image Limited, CAN and Captain Beefheart, he named his first band in reference to Johnny Rotten – Kusare Omeko, or 'rotten vagina'.

The band’s name was soon updated to INU (Japanese for dog or dogs), and the group repeatedly changed band members before finding the industrial, metal and jazz-improvised guitar work of Masahiro Kitada. Playing in a similar punk and post-punk style to their British contemporaries, INU’s emotional, incandescent performances quickly gained the attention of Japan Record. Meshi Kuuna! was released in March 1981, their only studio album (though a live album, recorded in March 1979, was released on Alchemy in 1984).

More precise than the Sex Pistols' brash, rowdy punk but fiercer than the more mature, thoughtful experimentation of PiL – with added humour. That’s how one could briefly describe Meshi Kuuna!.

Machida sang in Kansai’s clear, relatable dialect. Part rapping, part spoken word poetry, his lyrics focused on the anger and sorrow of the working class. “Deny my existence from the start, in order to beat up those fuckin’ middle class kids,” Machida sang on “Meshi Kuuna” [Don’t Have Meals], his fury riddled with anxiety and inner turmoil. Machida’s worldview was furious and bewildered – on “Ossan to Obahan” [Ladies and Gentlemen], he snarled: “I don’t know what will be left after everything’s finished. I’ll kill you anyway.”

“Your life is full of anxiety. You can’t see anything,” he sang on “Inrotakin” – a track titled after a sign in Osaka. The sign, conforming to old Japanese writing conventions, wrote Kanji characters backwards (as such, In Ro Ta Kin advertised homeware brand Kintarōin), which, to Machida, had no meaning or sense. As a young man, taking the train to work and seeing the sign every day, it somehow symbolised the unforgivable absurdity of Machida’s world.

“Tsurutsuru No Tubo” [Smooth Pot], for example, utilised a solid rhythm section, emphasising the bass drum with detailed, heavy-handed bass play, while the guitar phrases were dominated by punk’s typical major chords. In this way, INU incorporated the latest trends in British and American rock. As Happy End achieved with folk rock and RC Succession with pop rock, INU created a Japanese-language foundation for post-punk and new wave.

But the band would soon break up. Guitarist Kitada, the main director of the INU’s style and music, decided to quit the band and, only three months after the release of Meshi Kuuna!, INU held their last live performance – at Meguro’s Rockmaykan, in June 1981.

Yet INU’s legacy lived on. Their post-punk style and ethos was immediately succeeded by rokin’on-kei [rocking-on style], a group of artists termed for being featured in Rockin’On magazine. The likes of the Blue Hearts, Elephant Kashimashi and Number Girl offered a noisier, grittier alternative to mainstream rock and pop music.

In the early 2000s, the Kansai Zero Generation was also heavily influenced by INU and other Kansai No Wave groups. Names such as Afrirampo, Oorutaichi, Illreme (a.k.a. Jun Kamoda) and Oshiripenpenz inherited INU’s rebellious ethos, playing a comparable post-punk style sung with lyrics of INU’s similar mixture of sorrow and humour. Oshiripenpenz even invited Machida’s band to be the main act of their event held at Osaka Castle Open Air Music Hall in 2018.

Contemporary acts such as Osaka’s Gezan have their roots in INU’s punk – in their rebellious spirituality, if not strict musical characteristics. Meanwhile, Machida himself, after playing under several names, has since 2016 performed in a band named Nanji Waga Tami Ni Arazu [You are Not My Follower].

To this day, INU’s legacy is alive and continues to unfold. INU and the Kansai No Wave scene were fundamental bands in the history of Japanese post-punk, but they also embodied the uniqueness of the Kansai region. Kansai culture allows us to be stupid and foolish with each other: we don’t have to be the “right” person. “Open your head and enjoy yourself a little easier”, as Machida sang on “Tsurutsuru No Tubo” – choose any way of life you wish.