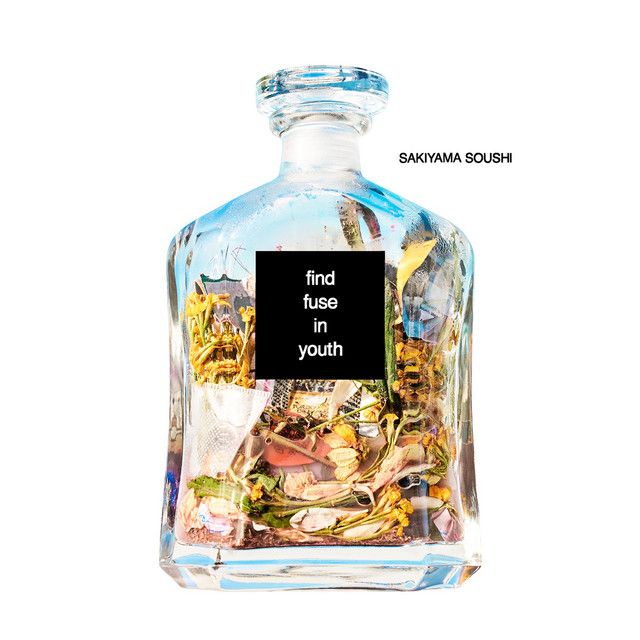 While the core strength of Sakiyama’s songwriting and storytelling is unchanged, Find Fuse in Youth takes his quest for colourful new types of music further than ever before.

Singer-songwriter Soushi Sakiyama has long been a keen explorer of both his own musicality and all kinds of wider music. In the six years since he attracted major attention for his performance of “Samidare” [May Rain] on an internet variety show, he’s consistently demonstrated this process of exploration – up to and including Find Fuse in Youth, his major label debut.

Sakiyama’s initial debut, Itsuka mita kuni [The Country I Saw One Day] largely consisted of the same playing and storytelling style that first shocked viewers of the variety show he’d made his name with. Except for the MIDI number “Ryū no ko” [Dragon Child], Itsuka was clear and simple, showing Sakiyama’s humanistic lyrics and beautiful melodic technique.

At that point back in 2018, Sakiyama could have settled with that originality – but he didn’t. His second album, Namu Odori [Line Up, Dance] split its songs evenly between the narrative and MIDI tracks of his debut and others that tried to establish a more well-rounded band performance.

His deviation from the critically acclaimed narrative style of his debut was a daring surprise. Welcoming guests such as Ohzora Kimishima, Yukichi Kasaku/men, and Hakushi Hasegawa, Sakiyama and his band created a creature like work with all the rich colours and distortions of indie rock and art pop.

After those indie efforts, the arrival of Sakiyama’s third album and major label debut was even more hotly anticipated. Find Fuse In Youth, that record, turns out to reinterpret his past styles, particularly those of his original debut, whilst also exploring richer musical experiments.

The album begins with the passionate guitar rock of "Undulation" which, alongside "Heaven," and "Samidare", was one of Fuse’s advance singles. All three are older Sakiyama songs updated by J-pop producers and, fittingly, the arrangements are relatively more accessible and pop oriented. They’re among around half of the songs on Fuse that feature production from outside producers. They can be said to redefine Sakiyama’s music from a third-party perspective.

The remaining half was arranged by Sakiyama himself, somewhat following the style of his first album but incorporating a wider range of different musical elements. His previous knack for storytelling can be found in "Tori ni nari umi wo wataru" [Become a bird and cross the sea], a song that has been in his repertoire for several years, and "Tadaima to ieba" [Speaking of which, I’m home]. Meanwhile, he continues to sublimate MIDI music in songs such as the JPEGMafia-esque “Waterfall in Me” and hyper-pop-inspired “Me wo tojite, userukara” [Close your eyes and let me go].

But on Fuse, Sakiyama gets more complex and profound, too. The instrumental interlude "Observation" has the feel of free improvisation, while "Repeat" is an atmospheric synthpop piece reminiscent of cloud rap. Sakiyama’s quest for a variety of different kinds of music has made his work more colourful than ever before.

While he experiments with such a variety of sounds, Sakiyama’s emotional guitar play, excellent sense of songwriting and delicate, swaying singing voice remain the foundations of his music. Even as the environment surrounding his music changes, that core is unshakeable.

His lyrics, meanwhile, have become increasingly sophisticated, depicting sharp real conflicts, nostalgic landscapes and anguished emotions. Fuse is frequently dramatic and cinematic, skilfully expressing scenes and emotions amongst greater subtlety and complexity. As such, behind the rest of the changes in Sakiyama’s work, his foundational strength is unchanged.

On the one hand, Fuse reinterprets expressions that Sakiyama has explored previously. On the other, he has gone beyond that and opened up a new originality in his style. His major label debut is packaged with familiarity to reach the masses and yet challenges Sakiyama’s experimental process. Whether he decides to continue to experiment on anew stage or merely refine the style he has arrived at thus far, his activities have become increasingly unpredictable.