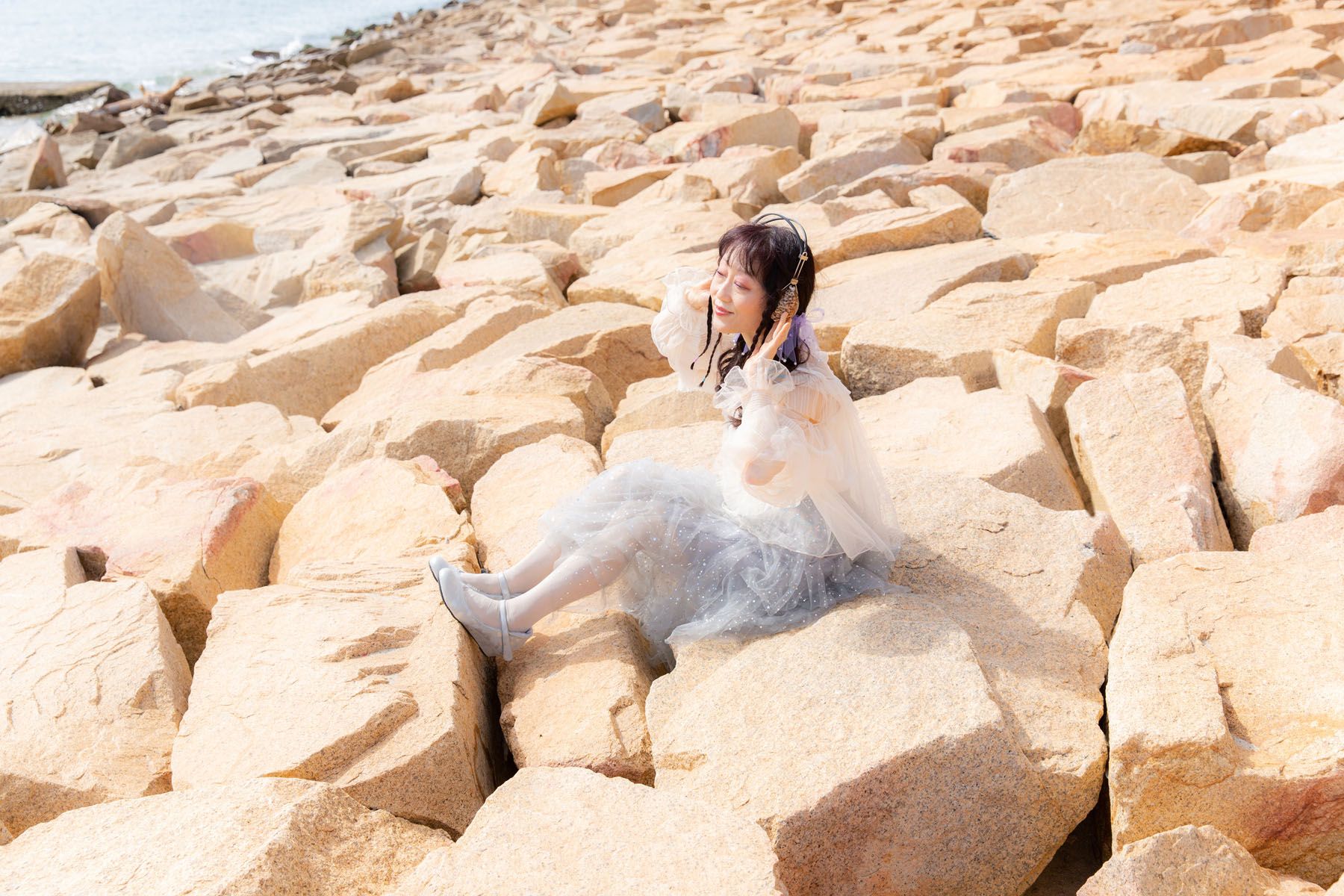 Haco’s selections champion and celebrate her collaborators, choosing works from those that have remixed her solo material.

Both as a solo artist and with collaborators (the most esteemed including Aki Onda, Ikue Mori and Terre Thaemlitz), Haco has spent decades sailing between realms of experimental pop music, imparting her touches on art pop and electroacoustic improvisation, field recordings and Onkyo.

Following early career appearances with baroque pop group After Dinner and electroacoustic experimentalists Hoahio, Haco earned spots on (and achieved greater worldwide recognition from) the legendary Improvised Music From Japan compilations in the early 2000s. Since then, she has drawn from the influences and skills of experimentalists across the globe, her music often becoming a melting pot of experimental music’s most exciting and distinctive names.

Haco’s playlist links directly to her two most recent full-length solo works, Qoosui and Nova Naturo. Taking the theme of ‘remix’, she chooses to platform artists she has worked with, demonstrating the breadth of her collaborators and the variety within her musical network. Here’s how she introduced her choices:

“This list features original songs from artists who have remixed my songs or will do so. Some participated in my Suiqoo EP, which featured remixes of songs from my previous album Qoosui, and many below will contribute to the remix album of my latest release Nova Naturo. I'll be guiding you through a mix of old and new tracks by some of my friends and beloved artists.”

Keiichi Sugimoto is a composer and producer who uses different solo names (FourColor, FilFla, Vegpher) depending on his sound approach, and also makes diverse music as a member of Minamo and Fonica. He is at the forefront of the electronic music scene and has also worked on film soundtracks, commercials and stage music.

I was lucky enough to collaborate with Vegpher for the first time on his latest album Minutus (2020). That song is called "A Mind Resort" and another version of it can be found on Nova Naturo.

Australian experimental composer and sonic artist Lawrence runs Room40, a label that reflects his philosophy of sound and listening. He is constantly travelling the world performing, producing and curating. (*My two albums Qoosui (2017) and Nova Naturo (2021) were released on Room40 sister label Someone Good)

In December 2008 he visited the Amazon rainforest and spent more than 50 hours field recording. Those collected sounds will finally be released in September, almost 13 years later, on Lawrence’s new album A Mirror Holds The Sky. It’s sound poetry of the rainforest, featuring the sound of birdsong, insect wings, water, wind and sky, and a clear and moving experience for the soul.

Moskitoo is an artist who weaves delicate, gentle and dreamy music; she charms my ears with her lovely, whispered voice. So far, she has released solo albums on labels such as 12k in New York, and often collaborates with Keiichi Sugimoto [Vegpher] as a vocalist on his projects.

Her own cover art and designs are also excellent. The single "Nunc" was released digitally in April this year, and the fantastical, fairy-tale-esque video work is a collaboration with Sapporo-based art unit ReguRegu.

From the ‘90s to the early 2000s, Nobukazu Takemura's work on his label Childisc, his DJing and his charisma were all tireless. His music doesn’t just have a charming sophistication and unique perspective but his videos, particularly those made with clay animation in 2003, show true passion beyond versatility.

Since 2008, Takemura has been living and working between Berlin and Kyoto, and in 2014 he released the metaphysically-themed album Zeitraum, which consisted of tracks created for video works and installations.

This is from the album Present Unmetrics by Mapstation, which is the solo project of Stefan Schneider, electronic musician and producer and the face of the current Düsseldorf sound. I’m honoured to have sung on this track. Schneider is best known as a member of legendary Berlin/Düsseldorf post-rock and electronic dub bands To Rococo Rot and Kreidler, but in recent years he has also been playing in the duo Hinosch with Koshiro Hino (YPY). Since 2016, Schneider has been active in developing his own label TAL, which is full of his taste and sound.

One of the hottest names in the Czech Republic’s underground music scene, Jára Tarnovski is the founder of post-everything quartet Gurun Gurun. His activities are diverse, including experimental duo Wabi Experience (with Federsel), improv collective IQ+1 and audio-visual project Telekinetic Assault Group.

Tarnovski also runs Jipangu, an independent label specialising in experimental music and sound art. He has collaborated with many Japanese electronica artists and has participated in two of my albums. We did a joint tour of Japan in 2017 and Europe in 2018.

Dustin’s unique style of playing with guitars and effects creates kaleidoscopic music. A multi-talented artist grounded in a DIY spirit, Dustin also produces his own videos and cover artworks. He has also released three albums as a duo with Takako Minekawa, and he currently lives in Los Angeles, where he performs and DJs.

Four years ago in Tokyo, Wong, Minekawa, Tarnovski and myself played as a quartet for a 20-minute improvised encore. That live recording, Kannazuki, was released in 2019.

In March this year Dustin released his solo album Internal Hot Spring, which is very pleasant and one of my favourites.

Laura Luna Castillo is a sound, new technologies & multimedia artist from Mexico. She has produced a number of virtual reality, installation and sculptural works, which are documented on her website. Having lived and worked in Prague, she has also had strong links with the Czech experimental music scene.

Her albums, woven together with minimalist, beautiful and hypnotic electronic sounds, have been released on a number of labels. This video is a collaboration with Tachyons+, based in North Florida, USA.

In the late ‘90s Asuna started playing experimental ambient drone music with reed organs, and in the 2000s his brilliant sound and art performances, such as the live installations 100 Toys and 100 Keyboards, attracted a lot of attention and led to successful tours in Europe, America, Oceania and Asia.

Several videos have been released documenting his live performances – they’re all worth checking out. In the meantime, he continues running his aotoao label. This track is a long guitar loop based piece with an unusual structure, which is typical of Asuna. It features the vocals of Rima Kato.

Sontag Shogun is a "neo-classical lullanoise trio based in NYC & Montreal,” and a collaboration between Ian Temple, Jeremy Young and Jesse Perlsteins. The group’s music features organic tunes that harmonise and disturb nostalgic piano melodies with ambient sounds and vocal effects.

When Jesse came to Japan in 2018 for his project Braided Sound, an improvisational ensemble performing site-specific graphic scores, I had the pleasure of meeting him when he played in Kobe. Sontag Shogun’s new album is due for release in 2022 and I remixed a track for the Japanese edition.

Gallery Six is a very prolific sound artist who represents the ambient music scene in Hiroshima. His drone music, a combination of nature sounds and electronics, has been broadcast all over the world to relax the ears of listeners. His life’s work concerns nature photography, though his music has a duality of light and dark, a mixture of noise and glitch.

With Gallery Six, I co-wrote three songs for my album Qoosui and, for the first time in his life, he wrote lyrics. He also provided the bonus track of Nova Naturo, "Frozen in Time Gallery Six Remix".