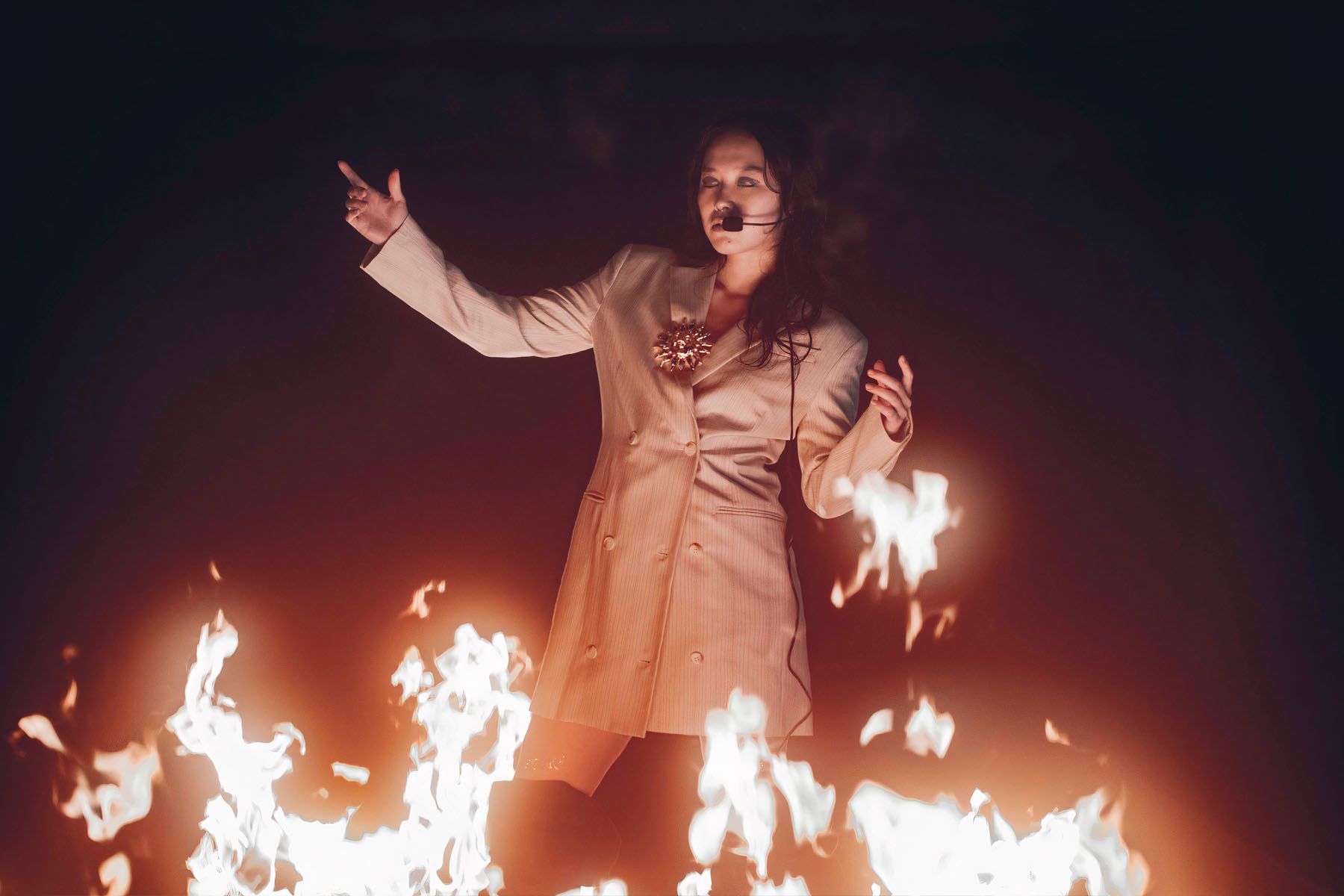 Hip-hop and art pop artist NTsKi selects tracks from her childhood that inspired her shapeshifting music and audacious visuals.

Since debuting in 2017, NTsKi has both influenced and become the product of a new era of alternative Japanese hip hop. The Kyoto-based singer, rapper, songwriter and producer was among the first to funnel innumerable influences into the blossoming scene and, in the years since, her music has grown even bolder in its variety.

NTsKi has employed so many different styles and sounds that, up to this point, her own style has been virtually impossible to pin down. She can murmur to a hip hop beat or provide her own soulful backing vocals; some of her tracks are minimal trap numbers, while others have the confrontational energy and balance of nostalgia/modernity of hyperpop.

That dependable variety extends to her collaborations, too. As well as working on IDM and wonky electronica with CVN and featuring on a summery single “Bubbles” from indie funk band South Penguin, NTsKi has appeared on tracks with rapper Dengaryu and outsider house artist Foodman.

For her playlist for the Glow, NTsKi looks to identify some of those early influences, those that moulded her current multi-genre sound. She explains: “I have chosen to focus on Japanese songs, pop music and electronic music that I have been listening to since childhood."

“Scandal Night” is composed of many varying samples and sounds, but the worldview of the lyrics, the sound of the echoing telephone and the voices all mix to create a weird and avant-garde atmosphere. The samples sound like real musical instruments and, combined with Miharu Koshi’s elongated vocals, they make for a pleasant listening experience. I used to listen to “Scandal Night” while getting ready to go to clubs and parties.

When I compose music, I try to make my vocals distinct from the melody line. In “First Class Honeymoon”, however, the synthesiser melody and vocal melody are the same from beginning to end. It’s refreshing. The costumes of SPY’s members in the artwork, wearing globes and airplanes, is strange but somehow cool. This is an excellent new wave track.

Dressed in a pink leotard, Junko Sakurada’s impressive “Misty” had a song-like style but a the feel of techno. The chords have a stylish tension, offset perfectly by Sakurada’s lazy, languid voice. It’s a catchy song that you’ll want to listen to over and over again.

When Kenji Sawada’s lustrous singing voice rides on the sensational rockabilly-esque guitar of “Stripper”, the song becomes more than just rock’n’roll. Sawada ignored the temptation to dress like a rockabilly singer, ditching denim for a scarf wrapped around his head and a Panama hat slanted on top; his androgynous, bewitching eye make-up reminiscent of glam rock. This is the song that got me hooked on Kenji Sawada.

This is Akina Nakamori's version of the theme song for the movie of the same name, which was released as Tenkawa Densetsu Satsujin Jiken [Noh Mask Murders]. The title is different, but the lyrics are the same, using erhu and folk melodies and Takashi Matsumoto's literary lyrics to create a mysterious mood.

“Futarishizuka” was Nakamori’s 26th single, a song with a sense of danger and a departure from the fresh public image at the time of her debut. In 1991, Nakamori was 26 years old and, even though she was still young, she had tremendous dignity, sex appeal and charm.

This is an Andean folk song called "El Borrachito", given Japanese lyrics by Jun Togawa. Adding to the folk of the original melody, Togawa sings in the form of a miko [shrine maiden] and her vocals feel like prayers, wishes and voices from the bottom of the earth.

A miko is a general term for a woman that, in ancient times, served the gods. They conveyed messages from the gods to third parties, playing roles in performing Shinto music, prayer, divination and mouth-to-mouth communication. In dressing as a miko, Togawa delivers an immense message.

This song, which was also Hiroko Moriguchi’s debut single, is based on an unreleased song by Neil Sedaka called “For Us to Decide”. It was written as the theme song for the opening credits of the TV anime Mobile Suit Zeta Gundam, released in 1985.

Guided by a sad synthesiser melody, “Mizu no Hoshi e Ai wo Komete” [ForUs to Decide] makes me feel as if it plays a role in connecting Z Gundam to our world. It seems a shame to call it ‘just’ an anime song – but it’s my favourite among all anime songs.

This track harmonises Ryuichi Sakamoto's cool spoken word, David Sylvian's chorus, and a sad synthesizer melody to create a fantastic song. The contrast between Sakamoto's realistic and serious lyricism and the music makes you feel as if you are going back and forth between reality and fantasy. I remember finding “Bamboo Houses” on sale for 100 yen at DiskUnion in Nakano, Tokyo, buying it, and feeling very surprised.