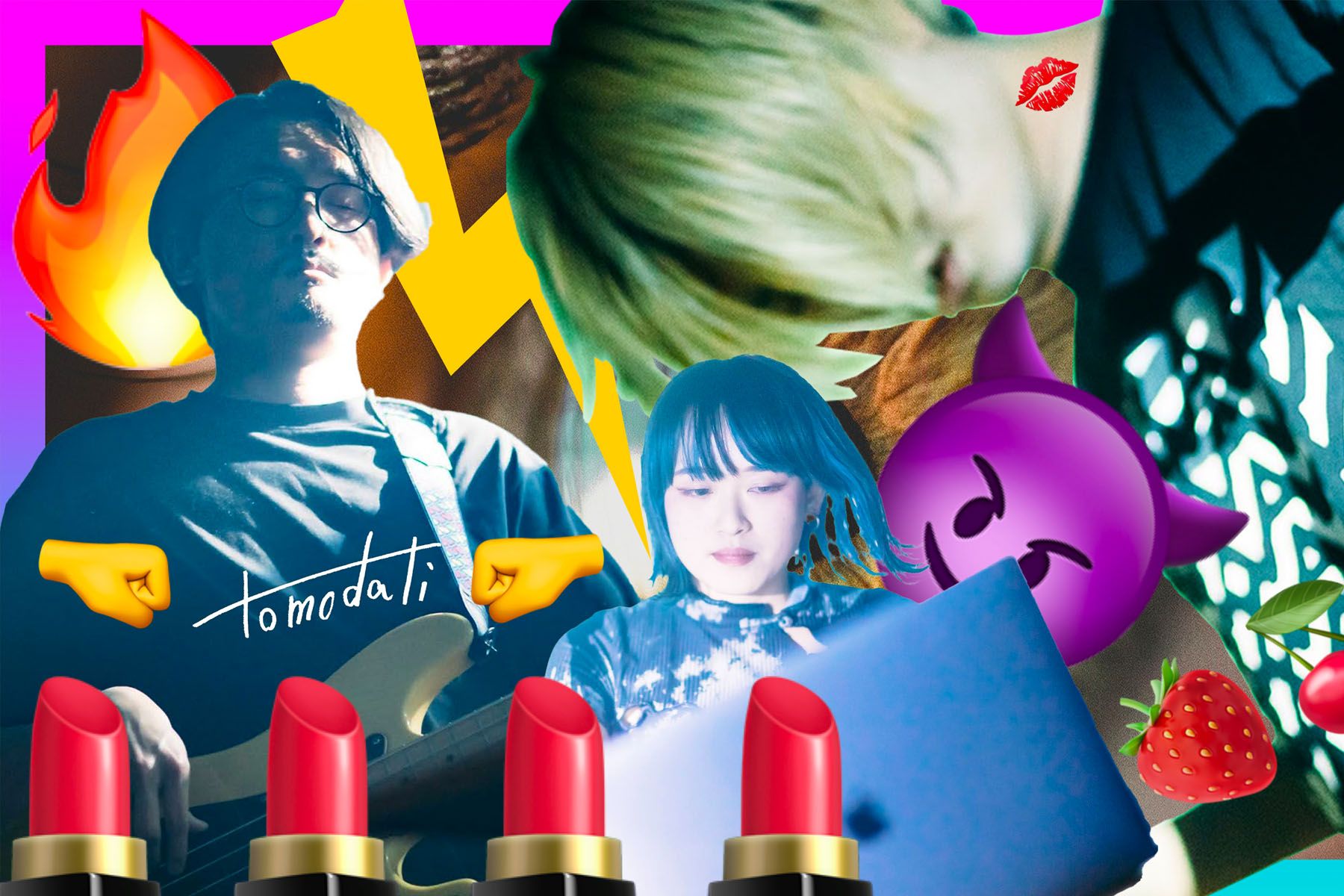 Progressive pop group tomodati’s Mutsuo Nakamura sets out some Japanese songs and artists that have influenced him most – and shaped the group’s diverse, experimental sound.

tomodati tease the limitless future of mainstream pop; a future that normalises extremes of noise and abstraction, that boldly unifies contemporary trends and several eras and styles of experimental music.

The group’s self-titled debut, released in 2019, set out tomodati’s manifesto for a new pop. Its songs whirl from catchy synth funk, pattering electro high hats and sharp hip hop to rough haze and bizarre, progressive electronics: sounds override each other constantly, unafraid of both pop cleanliness and multi-layered cacophony.

tomodati’s latest single “Human Nature” continues to transcend conventions of taste and genre. Merging noise pop, acid techno, EBM and dance-pop, it demonstrates that tomodati continues to be one of the most exciting groups in Japanese progressive pop.

Mutsuo Nakamura founded tomodati in 2015. In curating a playlist for the Glow, he wanted to detail some of tracks that had the greatest impact on his music. Intended for English audiences, the results illustrate the length and breadth of Japanese pop, rock, noise, jazz, and much more. Here’s how Nakamura introduced his playlist:

“I make the most of the internet, listening to and studying music from all over the world and presenting my own songs with an interesting approach, inspiring melodies and chord progressions.

Basically, I write songs by myself using a laptop and DAW software. But at live shows, I have Kenji Fujii, who is in charge of bass and synthesizers, and sadakata, who is in charge of VJ [video jockey] and vocals.I know I said that I study music from all over the world, but since this article is aimed at English speakers, I'd like to share with you some of my influences from Japan that have had a big impact on me, and that English speakers may find difficult to find.”

Yura Yura Teikoku was a band that sadly disbanded in 2010. The band's debut album featured a psychedelic garage rock sound with intense fuzz guitars, but after the release of the double album Shibure/Memai [Numbness/Dizziness] in 2003, the band started to express more freedom in their music. They taught me that it's okay to be in one band and not stick to one genre – that it's okay to play a variety of styles of music.

“Yakō-sei no ikimono sanbiki” [Three Nocturnal Creatures] is one of the more unusual tracks on the album [Yura Yura Teikoku no Memai]. The song is inspired by the traditional Japanese dance awa odori, and is unique because it perfectly combines the rhythms and textures of a Japanese festival with rock music. When I first heard it, I was struck by an odd sensation that I’d been missing it, even though I'd never heard it before! I had a strange feeling of nostalgia.

This group originally started out as a hardcore punk band, before steadily evolving their music and coming up with extreme songs like this one. When I was a fan of Captain Beefheart, I was looking for a similar band in Japan and found Aburadako. I was struck by the complexity of their songs, the distorted guitars, the difficult and poetic lyrics, and the eerie atmosphere of their music videos.

Jacks is one of the most famous Japanese psychedelic garage rock bands. This song, which opens an album [Vacant World, 1968], starts with a strange and intense guitar sound that I don’t know how to play, and drums that give off a free jazz vibe. The lyrics are inspired by a stormy night voyage, and a swarm of sounds that recede and return really make it feel like just that.

When I went to see the band's guitarist Haruo Mizuhashi, who sadly passed away in 2018, play this song live, I wondered how he got that guitar sound. I was impressed by the way he was strumming the guitar strings with his fingers without using a pick.

This is one of the most fanatical bands in Japan, but I love them so much that I want to introduce them to you. I found out about Horizon Yamashita Takkyubin when I played with them in Kichijoji, Tokyo. I was walking down the dark stairs of a live music venue for the day's rehearsal, and they were rehearsing this song. I remember the moment I heard the intro, and being shocked like a bolt through the head. The band is now on hiatus, but hopefully one day we will get to see them live again.

When I first discovered hip-hop, American gangster rap was imported and the image of hip-hop as music for delinquents was well-established. That was the image I had created of the genre. I wasn’t a delinquent, so when I listened to hip-hop, I enjoyed it as something distant from myself.

Then I found out about Kimidori, and when I heard this song, I was shocked to hear rapping about exactly what I was thinking and worrying about. I was quite shocked. “Sometimes I feel insecure about myself,” is a punchline that, even now as an adult, often runs through my head.

The Southern All Stars, as their name suggests, were originally inspired by the Latin music of the Fania All-Stars. But in their own insatiable inquisitiveness, they changed their genre to pop music and have become one of the most popular bands in Japan. They’re huge – a bit like U2 in Europe.

The band invented a way of singing Japanese songs with a foreign pronunciation, which has since influenced many Japanese musicians. This song in particular has a sound reminiscent of garage, but at first glance you don’t know what language it’s sung in. However, if you listen carefully, you hear that it’s sung in Japanese with a very strange pronunciation. It’s both shocking and incredibly comforting.

When I was into free jazz by Ornette Coleman and Pharaoh Sanders, Lou Reed’s Metal Machine Music, noise by Keiji Haino, Merzbow and John Zorn (You've all been there, haven't you?), I was constantly looking for avant-garde music. Kaoru Abe’s name always came up, so I gave him a listen and was shocked by the way he could expose so many different emotions with just one saxophone. I was moved emotionally; it was as if the dots had been connected perfectly.

The name of this band is often given to cats in Japan. As that name suggests, Tama’s music is acoustic and seemingly relaxed. However, like the Beatles, every member is a songwriter and each one of them takes turns as the main vocalist depending on the song. They’re also quite eccentric in appearance, using ki no oke [wooden tubs] (the kind often used in Japanese bathrooms) as floor toms for their rhythm section instead of a more traditional drum set.

Tama’s songs vary depending on the member that created it, so you can get a lot of variety from listening to just one album. The song introduced here was composed by Kouji Ishikawa, the drummer. With a progressive development and lyrics that describe something like the happenings of a dream, by the end of the song it makes you feel like you’ve seen a movie.

INU was a punk band that disbanded after one album. In some ways, they’re reminiscent of the Sex Pistols – although they never became as big as the Sex Pistols, INU influenced countless Japanese bands.

Machizo Machida, the vocalist, was a very charismatic and popular figure at the time. He wrote the lyrics to this song, which begin with: "Like the wrinkles carved in the stone old man of the photo shop, I love you.” The rhythmic, literary lyrics struck a chord with me. That strange line, mixed with the pop melody and PiL-influenced guitar work, makes for a wonderful song. Machida Machizo went on to become one of Japan's leading novelists under [his birth name] Kou Machida.